The Cage, a short film created by the critically-acclaimed Neighborhood Film Co. for Filmsupply Originals.

Filmsupply Originals is a new series of exclusive, original films from its revolutionary filmmakers. The first film of the series, “The Cage” was created by the critically-acclaimed Neighborhood Film Co. The Cage was written and directed by Neighborhood’s founder, Ricky Staub. Embedded in a world of overwhelming darkness, violence, anger, and death, the short film is telling the story of a young man’s survival on Philly’s streets. Through incredible visual effects created by Jeremy Fernsler as well as a cast of non-actors, the film is bringing raw authenticity to the story. More information about Neighborhood Film Co. and Filmsupply as well as stills from behind the scenes and full credits can be found below the video.

Neighborhood Film Co. is a production house based in Philadelphia and Los Angeles. They mostly create exceptional films for global brands. Outside of their brand work, they often work on artful independent film projects. Get further information on: neighborhoodfilmcompany.com

Filmsupply is a full-service agency that partners with incredible filmmakers from around the world to make their outstanding footage available for licensing. Get further information on: filmsupply.com

Any footage © by Filmsupply Originals and Neighborhood Film Co. 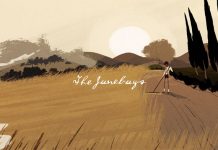 The Junebugs – Short Animation by Oddfellows

Back Alley Barbershop Identity by Plus63 Design Co.