Two aspiring criminals sit in their car and prepare mentally for a burglary, but suddenly the story turns into an unexpected car-jacking. With Point and Shoot, director Thomas Leisten Schneider has created a witty short film in the style of a nested meta-comedy. Starring Lucas Near Verbrugghe, Caleb Scott (who’s also the co-writer of the film) and Hollywood legend Donald Sutherland, Point and Shoot is a little masterpiece of comedy about method acting. Please read more below.

In a recent interview with Directors Notes, Thomas Leisten Schneider says: “I’ve always found that there was something pretty funny about experimenting a situation to become a better actor. We started working with Caleb Scott (co-writer) around this idea and wrote the script from this simple premise, we added some twists and turns and it became Point and Shoot.”

Besides the hilarious dialogues between the actors and a cleverly nested storyline, Hollywood A-lister Donald Sutherland is an additional highlight of the film. Point and Shoot was filmed within one day in Los Angeles, California. Then the footage has been edited with Vincent Tabaillon before it was colored by Greg Reese at the Mill in LA. Finished post production was done with Guillaume Raffi at Nighshift LA. Some stills and full credits can be found at the end of the article. For those who want to know more about director Thomas Leisten Schneider, please visit his website: thomasleistenschneider.com

The film has been featured also on our YouTube channel. Feel free to subscribe to watch more amazing film and animation projects! 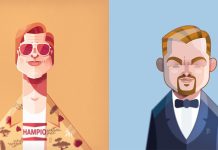