Written and directed by RCA graduate Christine Hooper, ‘The Last Time’ is a stylized comedy film about quitting smoking.

“Ever tried to quit smoking? But then been unable to resist returning to that toxic (but tempting) relationship again? And again. And again…” ‘The Last Time’ is a new short film, written and directed by RCA graduate Christine Hooper and narrated by Charlotte Ritchie of Fresh Meat fame. The film captures how hard it is for smokers to stub out love’s flame. Christine Hooper recently told us that the film was made with early cinema techniques of miniatures and a rear projection screen. For those of you who want to know more about this talented director, please visit Christine Hooper’s website or follow her on Vimeo, Instagram, Facebook, and Twitter.

Any footage © by Christine Hooper. Check out more animations and film projects in our popular Motion category. The film is also featured in our YouTube channel. Feel free to subscribe here. 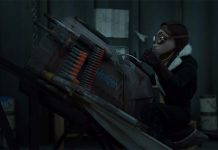