This is sad news today! On January 10, 2016, David Bowie dies aged 69 after 18-month battle with cancer. That’s why I want to start this day with a feature of these greate David Bowie illustrations by Helen Green.

The Birmingham, UK based freelance illustrator specializes mainly in portraiture – particularly inspired by her taste in music and fashion. As one can see, Helen Green is a big fan of David Bowie’s music as well as his different, charismatic styles. Below you can see two of her illustrations. The first one was made as a tribute to Bowie’s last album release “Blackstar”. The illustration was completed only a few days ago. The second work you can see below has been published last year. It features 29 career-spanning illustrations of David Bowie, starting from Davie Jones in 1964 (when he released the first single ‘Liza Jane’ with the King Bees) to an image based on a photo  from 2014. I think both artworks are very appropriate to the present day. They are a great homage to an outstanding artist who died too early.

Some additional facts about the illustator.

Helen Green has graduated in 2014 with a first class BA (Hons) in Illustration at Birmingham Institute of Art & Design. Already in 2011, Pop icon, Lady Gaga discovered Helen Green’s distinctive style. From this time forward, Helen Green became part of Lady Gaga’s Haus collective, working on projects for her and the Born This Way Foundation. You can see more of Helen Green’s illustrations on her website. The talented illustrator is also on Tumblr and Instagram.

You can discover more outstanding illustrative work on WE AND THE COLOR. The Illustration section includes a great variety of work ranging from personal to commissioned projects. 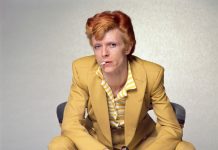