On YouTube you can find lots of awesome fun and extreme sports videos, which were directed and produced by highly professional filmmakers. One of the best of them is Devin Graham. During the past 5 years, he has produced over 200 videos in his Provo, Utah based studio. With more than 4 million subscribers and over 765 million views until now, his YouTube channel “Devin  Super Tramp” is extremely popular. Together with his team he has developed a distinctive visual style as well as a new niche in storytelling: “adults doing kid-like activities and making it larger than life.” Read more below.

Already in his early youth, Devin Graham has been making movies. He started by doing music videos with his siblings and then he got into making short stop-motion animations with Lego. Therefore it’s no wonder that he later studied at Brigham Young University’s film school, where he met some of his current partners of the Super Tramp team.

Equipped with an instinct for viral content and his extraordinary skills as a filmmaker, Devin knows how to create entertaining, witty and engaging videos. The camera technology made a big step during the past years. Today they can shoot every scene at 21:9, which results in an amazing cinematographic effect. For their latest video, the Super Tramp team has worked with some of the world’s best Pogo riders: Dan Mahoney, Dalton Smith, and Nic Patino. After every footage was shot, Devin and his team went back to the studio for the post-production using LG’s UltraWide 21:9 monitors. The full workflow including video editing, sound design, and color correcting happens in the exact same place because they have to work very efficiently.

LG’s lineup of curved 21:9 screens is the ideal solution for designers, photographers, and filmmakers who need a maximum of space for their creative ideas. Due to their exceptional picture quality and a bunch of innovative features, these screens are made for highest professional demands.

The Super Tramp team has significantly accelerated and simplified their workflow by using just one single workspace in conjunction with the new LG UltraWide 21:9 monitor. Devin says: “It just makes things so much easier and so much faster, because the technology is getting so much better.”

To find out more about Devin Super Tramp’s creative process, please have a look at the official LG website. 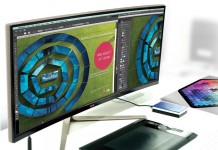